History of the ABCA

The ABCA was founded in 1981 by Dr. Bobby Westbrooks, a practicing Chiropractor in St. Louis, Missouri, who had a vision to empower African American doctors and students in chiropractic.

Dr. Westbrooks realized there was an immediate and ongoing need for minority supportive services in the chiropractic profession.  He founded the American Black Chiropractic Association (ABCA) with just a handful of doctors of African American descent.  He hoped to achieve some of his goals through the ABCA, and to share these goals with some of his colleagues and friends.

The ABCA’s first convention was held in St. Louis, MO in 1981 with just 17 people in attendance.  Many agreed the most important aspect of that first convention was the networking between doctors and students.  Since that time the ABCA has held an annual national convention every year, bringing together doctors, students and supporters of chiropractic from around the nation and several other countries in a personal and professional environment.

Over the years the ABCA has inspired, educated, and connected countless doctors with a sense of family and mentored hundreds of chiropractic students.  Most chiropractic college campuses have an active student chapter of the ABCA.  Each year scholarships are awarded through the Harvey Lillard Scholarship Program.  The ABCA also contributes to regular chiropractic career fairs to encourage African American students to consider chiropractic as a career choice.

The ABCA has not forgotten its humble beginnings. Today, despite its expanded scope, the organization continues to be mindful of the original objectives set forth by Dr. Westbrook. 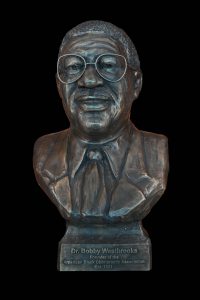 In 2018, during the 37th Annual ABCA National Convention, a bust of Dr. Bobby Westbrooks was unveiled and dedicated in his honor. The ABCA extends a very special THANK YOU to Logan University for all of their assistance in making this special tribute happen! The bust is housed in the Purser Center on the campus of Logan University.